This book deals with the milleniarianisms that flourished amongst the rootless poor of western Europe between the eleventh and the sixteenth centuries; and with the circumstances that favored it. But if that is the main theme, it is not the only one. For the poor did not create their own milleniarian faiths, but received them from would-be prophets or would-be messiahs. And these people, many of them former members of the lower clergy, in turn took their ideas from the most diverse sources. … This book examines both how these various bodies of millenarian belief originated and how they were modified in the course of being transmitted to the poor.
(S. 14) 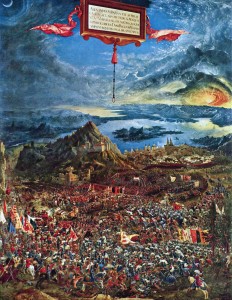 The self-exaltation of the poor emerges still more clearly from the curious stories, compounded of fact and legend, which are told of the people called ‘Tafurs’. A large part – probably by far the larger part – of the People’s Crusade [in the year 1096] perished on its journey across Europe; but enough survived to form in Syria and Palestine a corps of vagabonds – which is what the mysterious word ‘Tafur’ seems to have meant. Barefoot, shaggy, clad in raggish sackcloth, covered in sores and flith, living on the roots and grass and also at times on the roasted corpses of their enemies, the Tafurs were such a ferocious band that any country the passed through was utterly devastated. Too poor to afford swords and lances, they wielded clubs weighted with lead, pointed sticks, knives, hatchets, shovels, hoes and catapults. When they charged into battle they gnashed their teeth as though they meant to eat their enemies alive as well as dead. …

The Tafurs are shown as having a king, le roi Tafur. He is said to have been a Norman knight who had discarded horse, arms and armour in favour of sackcloth and a scythe. At least in the beginning he was an ascetic for whom poverty had all the mystical value which it was to possess for St. Francis and his disciples. …

In each captured city the Tafurs looted everything they could lay hands on, raped the Moslem women and carried out indiscriminate massacres. The official leaders of the Crusade had no authority over them at all. When the Emir of Antioch protested against the cannibalism of the Tafurs, the princes could only admit apologetically: “All of us together cannot tame King Tafur.” The barons seem in fact to have been somewhat frightened of the Tafurs and to have taken care to be well armed whenever they came near them. …

The fall of Jerusalem was followed by a great massacre; except for the governor and his bodyguard, who managed to buy their lives and were escorted from the city, every Moslem – man, woman and child – was killed. In and around the Temple of Solomon “the horses waded in blood up to their knees, nay up to the bridle. It was a just and wonderful judgement of God that the same place should receive the blood of those whoses blashemies it had so long carried up to God.” As for the Jews of Jerusalem, when they took refuge in their chief synagoge the building was set on fire and they were all burnt alive. Weeping with joy and singing songs of praise the crusaders marched in procession to the Church of the Holy Sepulchre. “O new day, new day and exultation, new and everlasting gladness … That day, famed through all centuries to come, turned all our suffering and hardship into joy and exultation; that day, the confirmation of Christianity, the annihilation of paganism, the renewal of our faith!” …

If one bears these happenings in mind it seems natural enough that the first great massacre of European Jews should have also occurred during the First Crusade. The official crusading army, consisting of barons and their retainers, had no part in this massacre, which was carried out entirely by the hordes which formed in the wake of the prophetae. As the crusade came into being, observes one chronicler, “peace was established very firmely on all sides and the Jews were at once attacked in the towns where they lived”. It is said that already at the very beginning of the crusading agitation Jewish communities in Rouen and other French towns were given the choice between conversion and massacre. But it was in the episcopal cities along the Rhine that the most violent attacks took place. …

At the beginning of May, 1096, crusaders camping outside Speyer planned to attack the Jews in their synagoge on Sabbath. In this they were foiled and they were only able to kill a dozen Jews in the streets. The Bishop lodged the rest in his castle and had some of the murderers punished. At Worms the Jews were less fortunate. Here too they turne for help to the Bishop and the well-to-do burghers, but these were unable to protect them when men from the People’s Crusade arrived and let the townsfolk in an attack on the Jewish quarter. The synagoge was sacked, houses were looted and all their adult occupants who refused baptism were killed. As for the children, some were killed, others were taken away to be baptised and brought up as Christians. Some Jews had taken shelter in the Bishop’s castle and when that too was attacked the Bishop offered to baptise them and so save their lives; but the entire community preferred to commit suicide. In all, some eight hundred Jews are said to have perished at Worms.
At Mainz, where there lived the largest Jewish community in Germany, events took much the same course. There too the Jews were first protected by the Archbishop, the chief lay lord and the richer burghers but in the end were forced by the crusaders, supported by the poorer townsfolk, to choose betwee baptism and death. The Archbishop and all his staff fled in fear of their lives. More than a thousend Jews and Jewesses perished, either by suicide or at the hand of the crusaders. From the Rhine cities a band of crusaders moved to Trier. The Archbishop delivered a sermon demanding that the Jews be spared; but as a result he himself had to flee from the chruch. Here too, although some Jews accepted baptism, the great majority perished. The crusaders moved on to Metz, where they killed some more Jews, and then returned in mid-June to Cologne. The Jewish community had gone into hiding in the neighboring villages.; but they were discovered by the crusaders and massacred by the hundreds. Meanwhile other bands of crusaders, making their way eastwards, had imposed baptism by force on the communities at Regensburg and Prague. In all the number of Jews who perished in the month of May and June, 1096, is estimated at between four and eight thousend.
(S. 65 ff)

It is characteristic of this kind of movement that its aims and premises are boundless. A social struggle is seen not as a struggle for specific, limited objectives, but as an event of unique importance, different in kind from all other struggles known to history, a cataclysm from which the world is to emerge totally transformed and redeemed. This is the essence of the recurrent phenomenon – or, if one will, the persistent tradition – that we have called ‘revolutionary millenarianism’.
As we have seen again and again in the course of this book, revolutionary millenarianism flourishes only in certain specific situations. …

The story told in this book ended some four centuries ago, but it is not without relevance to our own times. The present writer has shown in another work how closely the Nazi phantasy of a world-wide Jewish conspiracy of destruction is related to the phantasies that inspired Emico of Leiningen and the Master of Hungary; and how mass disorientation and insecurity have fostered the demonization of the Jew in this as in much earlier centuries. The parallels and indeed the continuity are incontestable.

But one may also reflect on the left-wing revolutions and revolutionary movements of this century. For, just like medivial artisans integrated into their guilds, industrial workers in techologically advanced societies have shown themselves very eager to improve their conditions; their aim has been the eminently practical one of securing a larger share of the economic prosperity or social privilege or political power, or any combination of these. But emotionally charged phantasies of a final, apocalyptical struggle or an egalitarian Millennium have had much less attraction for them. Those who where fascinated by such ideas are, on the one hand, the populations of certain technologically backward societies which are not only overpopulated and desperately poor but also involved in a problematic transition to the modern world, and are correspondingly dislocated and disoriented; and, on the other hand certain politically marginal elements in technologically advanced societies – chiefly young or unemployed workers and a small minority of intellectuals and students.
(S. 281ff) 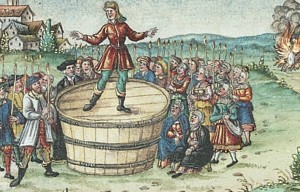