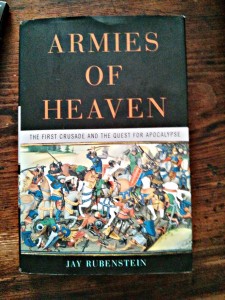 Jay Rubenstein’s book is – other then the title might suggest – mainly a military history of the first crusade. It details the sequence of events form the first calls to free Jerusalem from the “Yoke of the Turks” until the capture of Jerusalem. It even concludes the narrative by telling what happened to some of the major protagonists of the war. And those major protagonists were – according to this book – mostly nobility, counts and princes from Catholic Europe. Rubenstein does not seem to think it necessary to frame his narrative of the crusade in any kind of historical theory. In fact I often thought that he did not rise much above being an arbiter between and a translator of differing medival descriptions of the crusade. His proclaimed interest in the apocalypse is at best a very weak guidance through his narrative and often felt like added as an afterthought. In fact he does not even try to define what he means by apocalypse and seems to have no interest in its theological implications even though he does quote relevant parts of the bible.