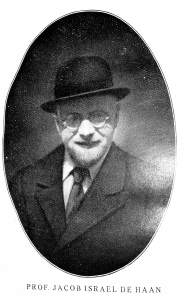 He was born in Smilde (Holland) in 1881 and spent his childhood in Zaandam, where his father was employed as cantor and teacher by the local community. His early development roughly resembles that of many of his Western and Central European contemporaries, clever boys born into conventional Judaism and estranged from it shortly after leaving the parental home in the pursuit of wider opportunities of advancement. While training for the teaching profession, he began to attract attention in literary circles. Among the admirers of his poetry was a (non-Jewish) physician, Johanna van Marseveen, whom he subsequently married. She subsidized his legal studies, which led to his appointment as a university lecturer. He joined the Social Democrats: his membership of a party delegation to Russia resulted in a book on the condition of political prisoners in Tsarist jails; and in February 1918 he attended the conference in Amsterdam at which the forthcoming peace negotiations came under review. Soon afterwards he renounced Socialism. The publication of Het Joodsche Lied (the Jewish song) had marked the start of his return to a Judaism more fervent than that of his childhood environment. He was now attached to a group of religious Zionists associated with the Mizrachi, which, towards the end of 1919, feted him as the first Dutch Jew to settle in Palestine under Zionist auspices. There he earned his living as correspondent of the Amsterdam Algemeen Handelsblad and (from 1923) the London Daily Express. He also lectured at the Government Law College in Jerusalem.